Assoc. Prof. Dr. M. Fatih Hüseyinoğlu, during his opening speech, underlined that Dr. Mehmet Baki who has received his doctorate degree from Boğaziçi University from the Department of Molecular Biology and Genetics, has also international studies on biodiversity and ecology.

At the beginning of his speech, Baki Yokeş stated that he was happy to be invited by University of Kyrenia and  explained the concepts of  “native species“ and “alien species “, along with the ways and types of their translocation. Dr. Mehmet Baki Yokeş also stated that there are 20 marine ecosystems caused by natural factors such as salinity and temperature in the seas. Yokeş also added that some species might not be able to adapt, while others that could survive could come out of this environment in different ways.

Yokeş stressed that in parallel with the developments of maritime transport and the increase in the spread of different species of animals and flowers, has also been observed in sea creatures, which shows that maritime transport is a very important factor. Yokeş presented detailed information and images showing different species carried by ships in the coast of Turkey, and completed his speech by giving examples from other parts of the world. 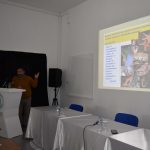 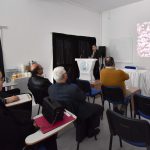