University of Kyrenia Faculty of Health Sciences New Building and Prof. Dr.İlkay Salihoğlu Republic Conference Hall and the COVID-19 Exhibition, which consists of 65 works of 42 artists, has been open to service with a magnificent ceremony attended by the President of the Turkish Republic of Northern Cyprus, Ersin Tatar – University of Kyrenia

University of Kyrenia Faculty of Health Sciences New Building and Prof. Dr.İlkay Salihoğlu Republic Conference Hall and the COVID-19 Exhibition, which consists of 65 works of 42 artists, has been open to service with a magnificent ceremony attended by the President of the Turkish Republic of Northern Cyprus, Ersin Tatar


The new building of the Faculty of Health Sciences of the University of Kyrenia has been put into service by the President of the Turkish Republic of Northern Cyprus Ersin Tatar. During the ceremony, the conference hall for 400 people which named as Prof. Dr. İlkay Salihoğlu Republic Conference Hall after the decision of Günsel Family Council and the opening of the COVID-19 exhibition consisting of 65 works of 42 artists have been realized.

President Ersin Tatar: “The rise of such works in the TRNC is a meaningful message to the world that there are two states in Cyprus.”
Starting his speech, President Ersin Tatar said that important investments such as the University of Kyrenia Health Services Faculty building shows that our country’s future is in safe hands and bright.

Tatar underlined that after the decision of Günsel Family Board the conference hall was named after Prof. Dr. İlkay Salihoğlu who is a very important scientist was raised in our country and has significant academic achievements at national and international level. Ersin Tatar described the decision of Günsel family board as an important act cause it brings the past and future of TRNC together.

Tatar said : “ We saw a bright future and if we evaluate the developments in the region together with Turkey’s rhetoric and attitude, rise of such works in TRNC is a message given to the world.“

Tatar said that the Turkish Cypriots are supporting this message regarding the existence of two separate states in Cyprus by strengthening and embracing the TRNC and emphasized that brave and courageous entrepreneurs like the Günsel Family promising universality.

President Tatar stated that during his prime ministry, Near East University Vice Rector Prof. Dr. Tamer Şanlıdağ and Prof. Dr. Füsun Yıldız from UoK made a great contribution to the government’s management of the pandemic process by taking a part in the related studies. Ersin Tatar said that thanks to the pandemic process that managed successfully, the state and private sector continued their investments despite the economic difficulties and that this symbolizes the belief in the future as well as the rise of the TRNC in the Eastern Mediterranean.

Emphasizing that they continue to open up to the world by integrating with Turkey Prof. Dr. İrfan Günsel said , TRNC’s domestic and national car, GÜNSEL was introduced to the world automotive market at the fair last month in Istanbul and it attracted great media attention in a wide geography from Russia to Colombia; From Azerbaijan to Qatar; He said that from Bosnia Herzegovina to Bolivia.

Günsel stated that the new building of the Faculty of Health Sciences of the University of Kyrenia, which has been added to the investments in many fields as it has been for 42 years, will make a significant contribution by training well-equipped staff in the field of health. He emphasized that the Prof. Dr. İlkay Salihoğlu Republic Hall will make Kyrenia University even stronger as a science and culture center.

Günsel said Prof. Dr. İlkay Salihoğlu who is also serving as the Chairman of Founding Board of Trustees of University of Kyrenia and as rector since its establishment, is an exemplary scientist with the students he raised and educated. He stated that the hall, which will carry the name of Prof. Dr. İlkay Salihoğlu, will host events worthy of his scientific identity.
Reminding that they recently announced a very special decision taken by the Günsel Family Board, Prof. Dr. Günsel said, “We will build 6 primary schools in 6 districts of our beautiful country and donate them to the Ministry of National Education and Culture Primary Education Department. These schools will be a sign of the Günsel Family’s love for our country, our state, our people and our children ”.

Prof. Dr. İlkay Salihoğlu: “This is the most exciting and proudest day of my 51-year academic life”
University of Kyrenia Rector Prof. Dr. İlkay Salihoğlu, in his speech, which started by greeting the attendees of the ceremony, said that he is in the 51st year of his academic career, which he started as an assistant at the university. Stating that he had the happiest and proudest day in his career, Prof. Dr. Salihoğlu thanked all members of the Günsel Family one by one who signed the decision to give his name to the hall in the newly opened Faculty of Health Services building.

After the opening speeches, the new building of the Faculty of Health Sciences of the University of Kyrenia and Prof. Dr. İlkay Salihoğlu Republic Hall inaugurated after the ribbon-cutting ceremony.

The new building of the Faculty of Health Sciences of the University of Kyrenia, which is built on an area of ​​3 thousand square meters, contains 20 classrooms, 2 fully equipped laboratories, 400-person conference hall, 3 meeting rooms, exhibition hall and cafeteria. 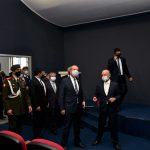