Three new exhibitions of the Cyprus Museum of Modern Arts, opened by President Ersin Tatar at the Near East University Faculty of Medicine Exhibition Hall, bring together painting, sculpture and ship models. 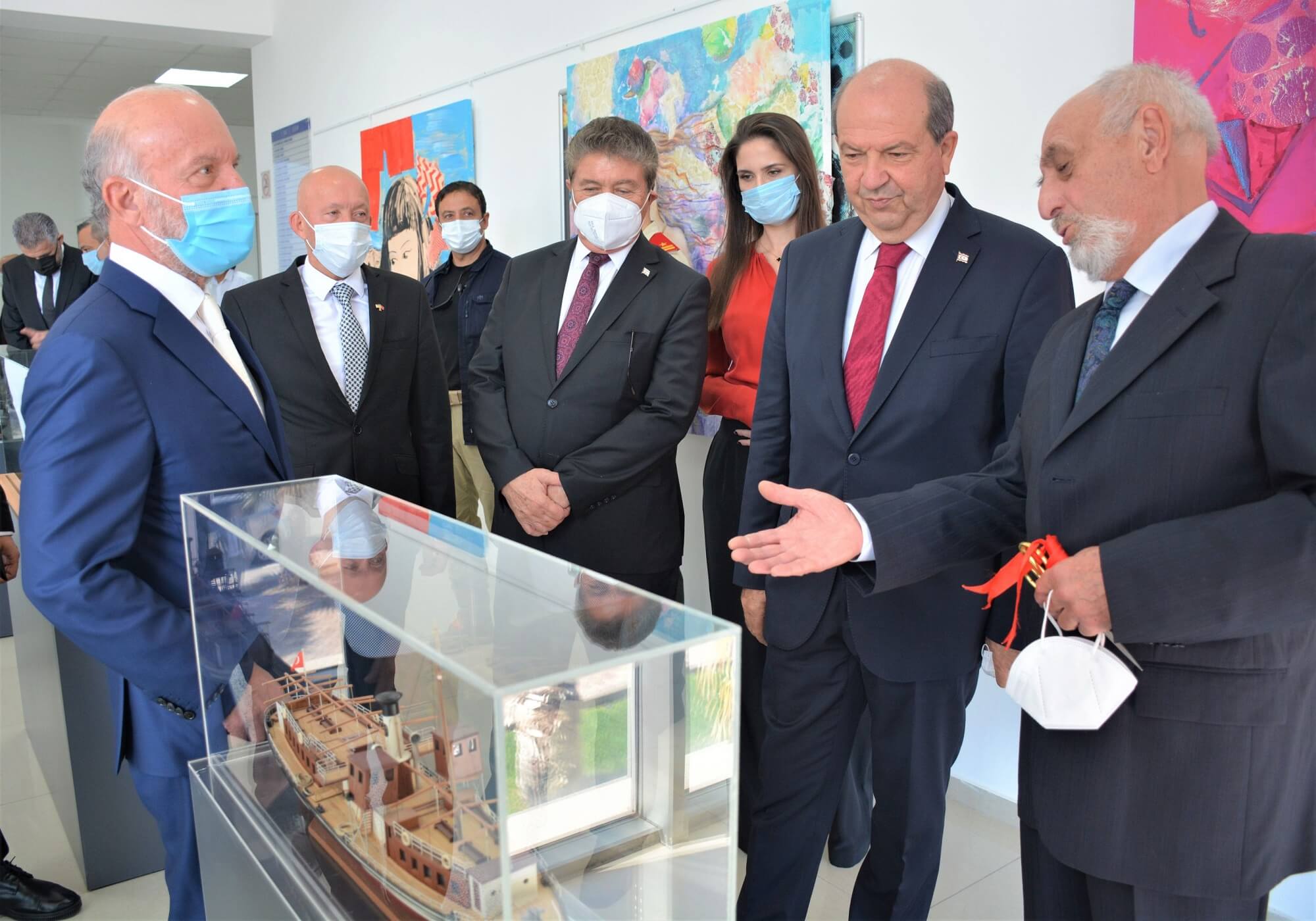 With the Fine Arts June Exhibition, the Sembigali Smagulov solo Sculpture Exhibition and the Ottoman Ship Models Exhibition, the number of free-to-visit exhibitions of the Cyprus Museum of Modern Arts has increased to 16.

The “June Fine Arts Exhibition” consisting of 40 works exclusively made by 14 academicians-artists from the Faculty of Fine Arts of Near East University for the Cyprus Museum of Modern Arts, the “Solo Sculpture Exhibition” consisting of sculptures by Kazakh artist Sembigali Smagulov and the ship exhibition bearing the signature of Cengiz Dumlupınar and titled the “Ottoman Ship Models Exhibition”, was opened by President Ersin Tatar at the Exhibition Hall of the Faculty of Medicine. With the exhibitions that will be open to visitors free of charge until 19 November, the number of exhibitions held by the Cyprus Museum of Modern Arts has increased to 393.

At the opening ceremony of the exhibitions, President Ersin Tatar and Near East University Acting Rector Prof. Dr. Tamer Şanlıdağ, Dean of the Faculty of Fine Arts and Design Prof. Dr. Erdal Aygenç and ship models artist Cengiz Dumlupınar made speeches. Kazakh artist Sembigali Smagulov, who opened a solo sculpture exhibition, expressed his feelings in the message he sent. 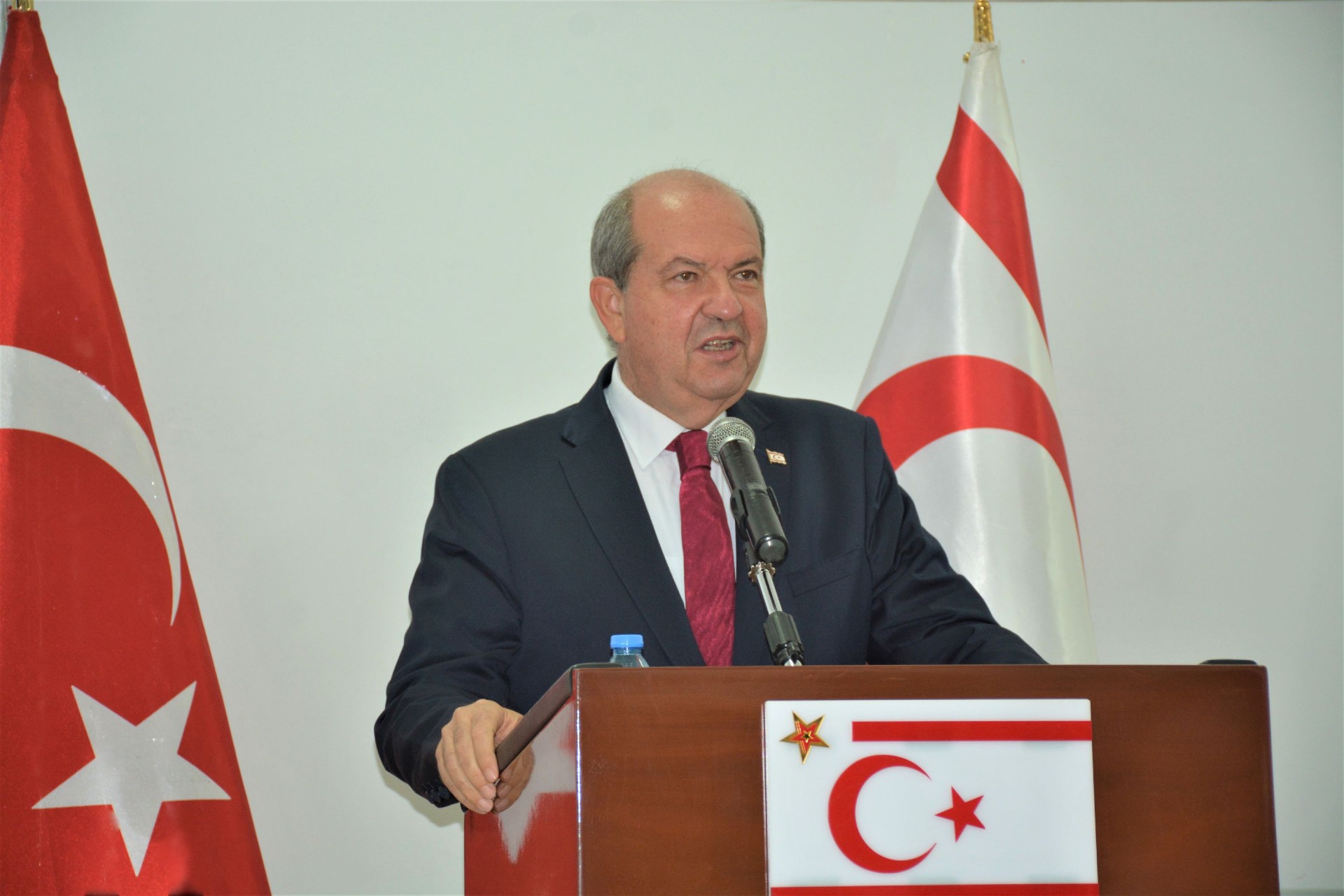 President Ersin Tatar: “The political obstacles and restrictions we have been subjected to are outdated and have no place in the contemporary world.”
Reminding that November is mostly a month of sadness in artistic works, President Ersin Tatar said that for the Turkish Republic of Northern Cyprus, November 15th Republic Day always carries nice and hopeful meanings. President Tatar said, “In this period when we celebrate the anniversary of the founding of our Republic, the exhibition openings held by the Cyprus Museum of Modern Arts increase our enthusiasm for the Republic.”

Emphasizing the universality of art, President Tatar said, “The modern art atmosphere created by Near East University, as in all its works, makes a great contribution to the future of the TRNC and conveys our voice to all over the world.” Emphasizing that the Turkish Republic of Northern Cyprus is often hindered in the political arena, President Ersin Tatar said, “As the TRNC, we successfully overcome all difficulties, no matter how much they hinder us. I would like to make a call to all people. There is a great culture, potential and resource in the TRNC. We claim that we exist by emphasizing all these with all the values ​​we have.”

President Ersin Tatar also touched upon the lack of water caused by global warming, which is a problem that concerns the whole world. Reminding that he made the opening speech at the 5th International Conference on Natural Resources and Sustainable Environmental Management organized by the Faculty of Civil and Environmental Engineering of Near East University, President Tatar said: “I consider it very important that the TRNC hosts the conference which was supported by 70 universities from 22 countries. I congratulate Near East University Faculty of Civil and Environmental Engineering Dean Prof. Dr. Hüseyin Gökçekuş and his team once again for organizing the conference from here once again.”

President Tatar said, “The political obstacles and restrictions we have been subjected to are outdated and have no place in the modern world. We are making our voices heard by the world with the rich work, investments and studies carried out by Near East University.” 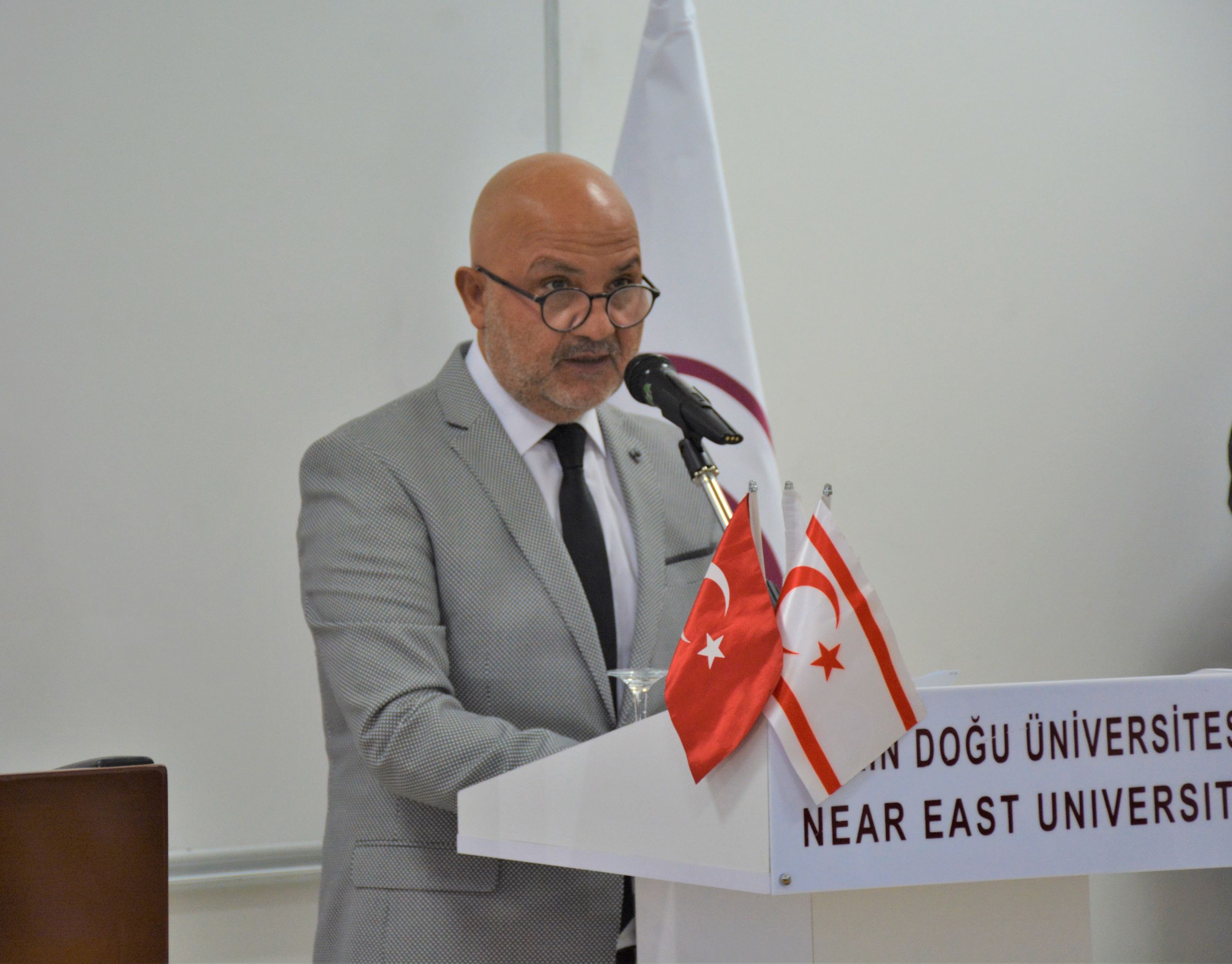 Stating that the exhibitions open to visitors at the Near East University, University of Kyrenia Campus and the Near East Yeniboğaziçi Campus spread the strong art atmosphere created by the Cyprus Museum of Modern Arts, Prof. Dr. Şanlıdağ said, “The approach of the 15 November Republic Week, through which the 38th anniversary of the establishment of our country will be celebrated, makes this productivity much more meaningful. The steps taken by the Near East Enterprises to strengthen the existence and identity of the Turkish Cypriot community and its roots in these lands, and the projects it has carried out, allow us to celebrate the 38th anniversary of the establishment of our Republic with a stronger voice.” 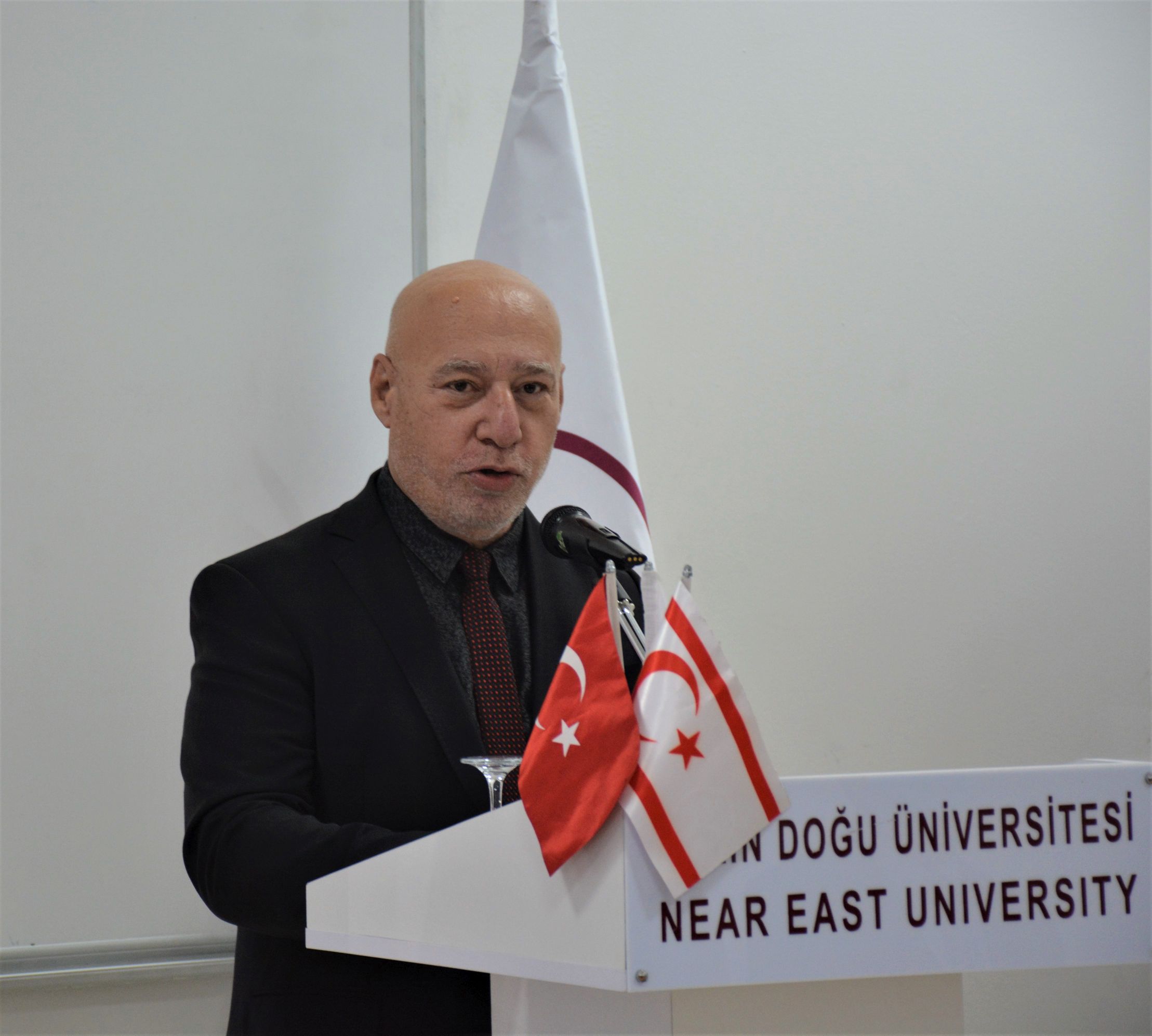 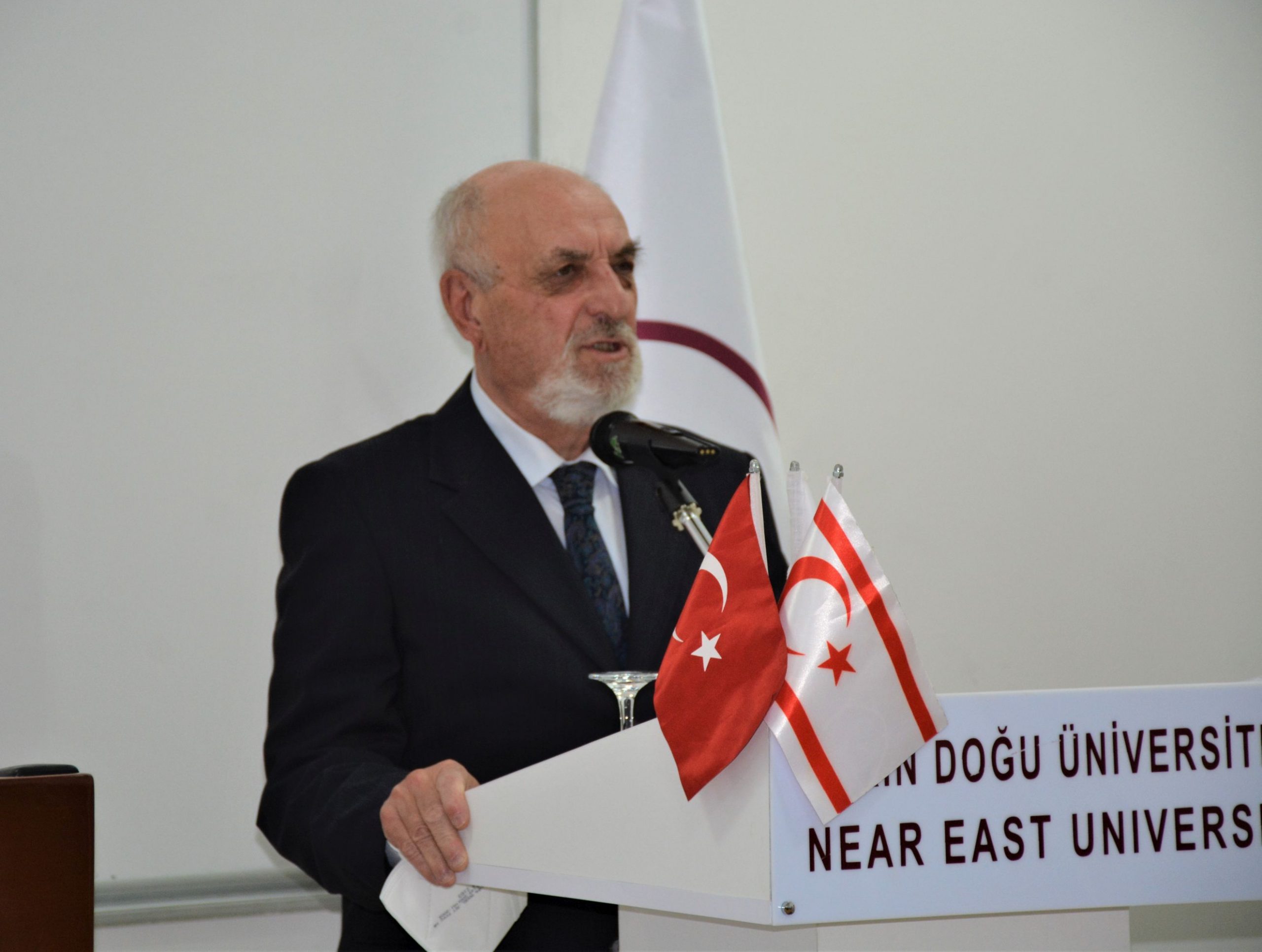 Cengiz Dumlupınar: “It is a great honor for me that the Cyprus Museum of Modern Arts will take the ship models bearing my signature into its collection and carry them to the future.”
Artist Cengiz Dumlupınar, whose ship models were exhibited at the Near East University Medical Faculty Exhibition Hall under the name of “Ottoman Ship Models Exhibition”, gave information about ship modeling in his speech. Stating that ship modeling is a hobby for most people, Cengiz Dumlupınar said, “For us who do this professionally, it is extremely important that the ship models we work with are made in accordance with the original models in history. Therefore, before starting the model, we work intensively to stay true to the history of the ships we model throughout a long archive scan.”

Emphasizing that a good ship modeler should specialize in many branches of art, Dumlupınar said, “A good ship modeler should turn into a historian when necessary, but also a carpenter, painter or metalworker when necessary.” Stating that each ship model he completed was a result of the work lasting several months, sometimes even years, Dumlupınar said, “It is a great honor for me that the Cyprus Museum of Modern Arts will take the ship models bearing my signature into its collection and to the future.” 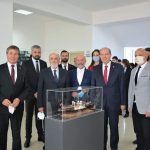 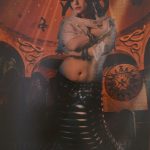