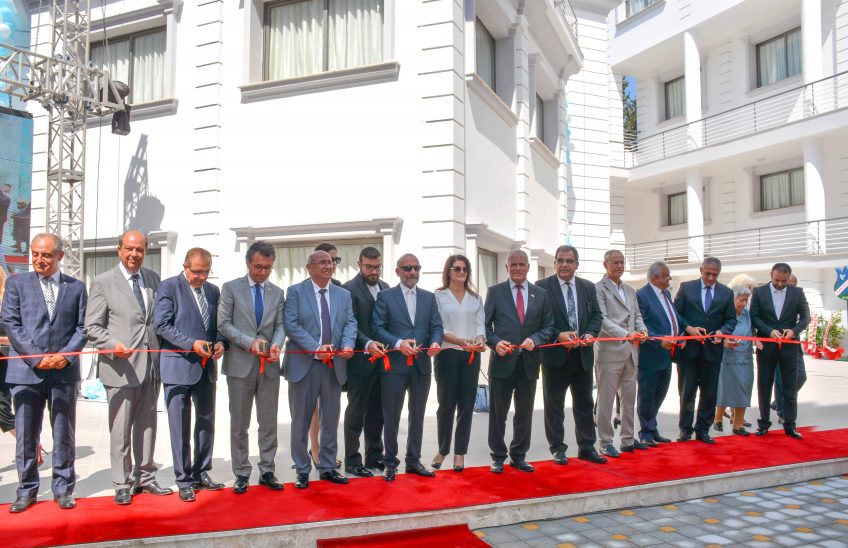 Aiming to host students, academic members and guests of the University of Kyrenia, a residence titled as Park Palace Residence, which covers 15.000 m2 and has a capacity of 600 beds has been opened to service with a highly attended opening ceremony.

According to the press release issued by the Directorate of Press and Public Relations of University of Kyrenia, the opening ceremony was held at University of Kyrenia Karakum Campus and many highly esteemed guests attended the ceremony including: the Vice President of the Republic’s Assembly, Zorlu Töre; Representative of the Turkish Embassy; National Education and Culture Minister Cemal Özyiğit; Founding Rector of Near East University Dr. Suat İ. Günsel; members of the Parliament; district governors, Mayor of Kyrenia Municipality Nidai Güngördü; Chairman of the Board of Trustees of Near East University, Assoc. Prof. Dr. İrfan S. Günsel; vice rectors; state and government authorities; and many other guests.

It was stated that the ceremony began with a minute’s silence, followed by the national anthem. This was followed by the speeches made by the Vice Rectors of University of Kyrenia Prof. Dr. GökmenDağlı and Prof. Dr. Rüveyde Bundak, Chairman of the Board of Trustees of Near East University Assoc. Prof. Dr. İrfan S. Günsel; Mayor of the Municipality of Kyrenia Nidai Güngördü; Members of Parliament Hasan Taçoyand Ersin Tatar; Minister of National Education and Culture of Turkish Republic of Northern Cyprus Cemal Özyiğit; and the Vice President of the Republic’s Assembly, Zorlu Töre.

Prof. Dr. Gökmen Dağlı: “We have created a modern living environment to meet the students’ and academicians’ social needs”
The first speech was done by the Vice Rector of University of Kyrenia Prof. Dr. Gökmen Dağlı, who provided details regarding the Park Palace Residence and stated that it comprised all kinds of contemporary infrastructure and comfort, offered to the service of university students and academicians to live in a secure and quality environment. Furthermore, Prof. Dr. Gökmen Dağlı expressed that Park Palace Residence has economic and residence type dormitories , residences for academic staff, a guest house, library, study hall, a health centre, a fitness centre, restaurants; all designed in a manner to provide the best of service to the students and the academic staff. Moreover, Prof. Dr. Dağlı stated that the University of Kyrenia offers quality education which internalizes interdisciplinary understanding, aiming to raise individuals who are able to think and make objective evaluations, who question and research, who value and make contribution to knowledge, who are creative and internalize ethical values, and last but not least, educate individuals who carry social responsibilities. Additionally, Dağlı stressed that University of Kyrenia is a university which is constantly developing and embraces two research and education ships, two training aero planes, a hospital and laboratories equipped with the latest technologies, medical imaging devices, dentistry hospital and laboratories, simulation rooms for aviation and maritime studies. He added that since the date of foundation, 2013, University of Kyrenia continues to develop and now is comprised of 13 faculties, 1 college, 3 vocational schools and a total of 42 undergraduate and associate degree programs.

Prof. Dr. Rüveyde Bundak: “It will fulfil both the need for accommodation and needs of social life”
Vice Rector of University of Kyrenia, Prof. Dr. Rüveyde Bundak during her speech stated that Park Palace Residence is now available to fulfil the students’ and the academicians’ needs by offering the vacationing in the comfort of a home and the needs related to social life. Furthermore, Prof. Dr. Bundak expressed that from the moment that the University of Kyrenia was founded it was in a constant effort to provide the best of service in terms of education and the infrastructure required and considering how quick it developed, it became one of the most attention drawing universities of the region.

University of Kyrenia comprises the most highly equipped hospital, which is available for education, training and research and Dr. Suat Günsel Faculty of Medicine Hospital is always ready for the service of the public in Kyrenia. Prof. Dr. Bundak expressed that there are a total of 8 departments of the Dr. Suat Günsel University of Kyrenia Faculty of Dentistry Hospital that has 1 fully-equipped operating theatre, 1 computerized tomography and CADCAM device that can enable dental prosthesis in a single day; alongside Pedodontics services that offers service from babyhood to childhood, giving treatment to mouth and dental tissue diseases. Prof. Dr. Rüveyda Bundak ended her words by expressing special thanks to sister university Near East University for all the support given since the date of foundation of University of Kyrenia.

Assoc. Prof. Dr. İrfan S. Günsel: “We will continue to make investment to the economy, health, art and technological development sectors of the country”
During his speech, Chairman of the Board of Trustees of Near East University, Assoc. Prof. Dr. İrfan S. Günsel stated that Park Palace Residence which covers15m2 of land and has a capacity of 600 beds; represents a new beginning to the countrys’ advancement in economy, health, art and technology. He added that Park Palace Residence is a new-modern contribution to the city of Kyrenia and a significant project brought to life, which will enable to host both students and guests in a comfortable and a pleasurable environment. With the educational institutions founded so far, Assoc. Prof. Dr. İrfan S. Günsel expressed that they not only wanted to offer the best quality in education but that they also want to offer all kinds of facilities to enable students, academic members and guests to live a comfortable all-needs-met environment. He stated that they have been making many investments in this direction and that they will be continuing to do so. Such that all the health investments they had made so far was targeted at offering contemporary and fully equipped health services; aiming to reduce the dependency on the services of others. Furthermore, Assoc. Prof. Dr. İrfan S. Günsel emphasized his belief that they have accomplished many significant goals including projects directed for the benefit of the public which enrich the communal life; projects related to technology and industry, made contributions to the history of the country via the museums established; alongside the education and culture sectors of the country.

In addition to the above, Chairman of the Board of Trustees of Near East University Assoc. Prof. Dr. İrfan S. Günsel stated that they aimed to reduce and in fact eliminate the public’s dependency on institutions and individuals beyond the boundaries of the country; established locations do as to offer prosperity to mainly the citizens of this country and others. He said that they worked to improve the economical status and prosperity of our people and also took significant steps in becoming a part of important shareholders of the economy of the region. Moreover, Assoc. Prof. Dr. İrfan S. Günsel expressed that they have pushed the boundaries of technology and service quality in the field of health and therefore felt rather proud to become a location which provides health services not only to the people of this country but also to people from around the world. As in achievements obtained in previous years, Assoc. Prof. Dr. İrfan S. Günsel expressed how happy they were to make another positive and essential contribution to the country and stressed that with this joy, they were further determined to make further contributions in the near future. He ended his words by promising to continue to be innovationist later to make a mark with other steps which add to the development of the country.

Ersin Tatar: “Economic investments will increase our welfare completely”
Also making a short speech, Member of Parliament, Ersin Tatar stated that a new clean and blank page was opened for Karakum, a new beginning. He expressed many thanks to the Günsel family for all the investments made till date. He also emphasized how the white building built brought connotations to mind such as richness and new light. He said that with the investments which the Günsel family continues to make, we were to pass through the economic crises and thus offer prosperity to the public. He ended his words by expressing his strong belief that with future investments to be made in the field of education, or all other related sectors, there will be better days to face all of us.

Cemal Özyiğit: “It is important to establish quality in education and in social living environments”
Also making a speech, Minister of National Education and Culture of the Turkish Republic of Northern Cyprus, Cemal Özyğit stated that higher education acted as an important ‘driving force’ and that raising the quality in education and in the social living environments were matters of significance. Minister of National Education and Culture Cemal Özyğit further said that development in education, and especially in higher education, and in the economy and social life were significant matters related to all of us. However, he added that what was more important was raising the standard of quality in the provided education. Moreover, he stated that the education service offered besides other services such as accommodation would leave an impression on every individual who chooses to study here and therefore, could act as representatives of our country upon their return to their main countries. Thus, he thanked the Günsel family for making another great investment which is sure to create a positive impact on all those who accommodate at Park Palace Residence.

Zorlu Töre: “I would like to congratulate the Günsel family for their economical investments”
The last speech of the opening ceremony was made by Representative of the President of Republic’s Assembly Zorlu Töre, who pointed out the significant investments which the Günsel family made over the years. He said that the Park Palace Residence is a magnificent project brought to life, offer full service to the students and the academicians. He further explained that new investments mean new job opportunities and an increased value created by universities; as they trigger a positive impact in other sectors including tourism and agriculture. Zorlu Töre then expressed his wishes to see graduates graduating from locations such as the one they are in now, and not only equipped with the knowledge and skills relevant to their fields of study but also as individuals who have acquired the total essence of being scientific. He further stated that economic crises could be overcome and that there is freedom in the Turkish Republic of Northern Cyprus. He emphasized his belief how we should make a claim of our country and with the support provided by the motherland and the Turkish armed forces. He ended his words by thanking and congratulating the Günsel family for all their achievements made so far.

Upon completion of the speeches made, the opening ribbon was cut and the guests had the chance to tour around Park Palace Residence.