According to the information given by the Press and Public Relations Directorate of Near East University, artist Valentina Mukhacheva stated that the history and nature of Cyprus affected her very much and that she tried to reflect all these values in her works.

Selimiye Mosque (Ayia Sophia Cathedral)
Built in the period of Lusignans in the center of Nicosia, St. Sophia Cathedral is one of the best examples of the gothic architectural style in the Middle East. It is similar to the Notre Dame Cathedral in Paris. The Cathedral, where the Lusignan kings were crowned, was converted into a mosque with various additions that were made after the Ottoman State conquered the island. In 1954, the name of Hagia Sophia Mosque was changed to Selimiye.

Lala Mustafa Pasha Mosque
It was built in Famagusta in the early 14th century. Nikolas Cathedral is one of the best examples of gothic architecture in Cyprus. The Lusignan kings during their reign were firstly appointed to the Cyprus crown in St. Nicosia. After wearing it in Sophia Cathedral, they also wore the crown of Jerusalem and Little Armenia Kingdom in this cathedral. It is very similar to the Notre Daim Cathedral in the city of Reims in France. After the conquest of Famagusta by the Ottoman Empire, the mihrab, minbar and minaret were added and turned into a mosque.

Arap Ahmet Pasha Mosque
The mosque located in Arap Ahmet Paşa District in Nicosia was built in the name of Cyprus Governor Arap Ahmet Pasha who actively took part in the conquest of Cyprus. The mosque was built in the 16th century in line with the classical Ottoman mosque plan and scheme. It is one of the most important Ottoman period works in Cyprus. Among the graves in the courtyard of the mosque is the tomb of the Cypriot Kamil Pasha, who served as a grand vizier for the Ottoman State.

St. Barnabas Monastery
The monastery, built in 477 in the name of St. Barnabas, who is considered to have brought Christianity to the island in the Famagusta region of Cyprus, has a rich collection of icons dating back to the 18th century. Archaeological artifacts extracted from various Early Age settlements in the region, especially from the Ancient City of Salamis, are also exhibited in the museum part of Monastery.

Who is Valentina Mukhacheva?
She was born in Tselinograd city of the Republic of Kazakhstan in 1972. After graduating from high school, she worked as a graphic designer at the Tselinograd Art Fund. In 1997, she graduated from the Department of Painting and Pedagogy at the I.D Shadra Art College in Yekaterinburg. She worked as a painting and easel composition teacher at the Children’s Art School. She also worked as an animator at the ‘A-Film’ studio. Between 1998-2003, she specialized on “monumental arts” at the monumental and decorative arts department at the Ural State Architecture and Art Academy. Since 2003, she has been working as an assistant professor of painting and drawing at the Ural State Architecture and Art Academy, Composition and Artistic Preparation Department. She started exhibition activities in 1998. The artist participated in approximately 75 national and international exhibitions and competitions. She held 9 solo exhibitions. She has been a member of the Union of Russian Artists since 2007 and a member of the Ministry of Culture in the Sverdlovsk Region since 2008. Her works are included in private collections in Russia, Kazakhstan, Germany, France as well as museums in Russia. 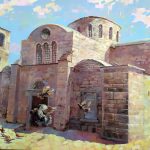 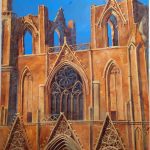 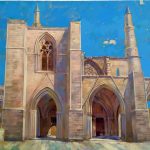 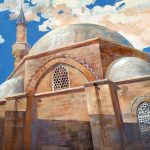